This is the description of argon used in light bulbs argon gas suppliers
Argon in welding role
Argon arc welding argon welding, the use of argon as a shielding gas welding technology. Is in the arc welding around the argon gas shield, the air isolated in the weld zone, to prevent the weld zone oxidation. So you can weld stainless steel, iron metal hardware.
Argon gas is an ideal shielding gas, which is 25% more dense than air. It helps to protect the welding arc during flat welding and reduces the consumption of shielding gas. Argon, a very chemically inert gas, does not chemically react with the metal even at high temperatures and thus does not suffer from oxidative wear of the alloying elements and a series of problems associated with it. Argon is also insoluble in liquid metals and therefore does not cause pores. Argon is a monatomic gas that exists in an atomic state and does not decompose or atomize at high temperatures. Argon heat capacity and heat transfer capacity of small, that is, its absorption is small, outward heat transfer is less, the heat in the arc is not easy to lose, the welding arc combustion stability, heat concentration, is conducive to welding.
Argon test report of our factory

Packaging & Delivery of our Argon

The conclusion that rare gas elements can not generate thermodynamically stable compounds since the end of the 19th century has given scientists artificially delineated a forbidden zone that has left most chemists reluctant to dwell on what is considered barren and barren, The study of chemistry has been neglected. However, a few chemists still try to synthesize noble gas compounds. In 1932, A.R. Antropoff of the former Soviet Union reported that he reacted with chlorine and bromine by discharge method in a liquid air cooler to produce a chlorine-volatile dark-red substance , And is considered to be krypton halide. But when someone repeated the experiment using his method, he failed. In this regard, Aitoto Popovich denied his own report, that the so-called krypton halide is actually nitric oxide and hydrogen halide, not krypton halide. In 1933, the famous American chemist Paul L. Pauling predicted that xenon hexafluoride (XeF6), kryptonium fluoride (KrF6), xenon acid and its salts could be prepared by calculating the radius of ions. Inspired by Pauline's first report and Pauling's prophecy, D.M. Younst failed to synthesize xenon fluoride and xenon by UV irradiation and discharge. After mixing fluorine and xenon in a certain ratio in the discharge synthesis of xenon fluoride, he applied a voltage of 30,000 volts between the copper electrodes for spark discharge but failed to examine the formation of xenon fluoride. Because of his lingering fear of traditional ideas, Janst did not insist on continuing his experiment, leaving a promising method halfway. A series of failures have caused very few people to get involved in this field again in more than 30 years. Regrettably, by 1961, Pauling also rejected his original prediction that "xenon is completely unresponsive to chemistry and does not in any case generate the ability to normally contain covalent or ionic compounds" .
History was quite dramatic. Just the second year Pauling denied his prediction, the first rare gas compound, XePtF6, miraculously appeared, and with its unique experience and grace Shocked the entire chemical community, marking the establishment of rare gas chemistry, creating a new field of rare gas chemistry.
Looking forward to your inquiry for this argon used in light bulbs argon gas suppliers 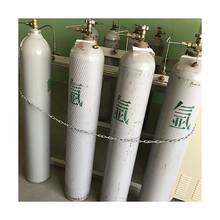